Stop the World - I want to get off!

19 Dates Through May 22, 2011
ABOUT ABOUT
Closing out the 2010-2011 Season, Austin Playhouse presents a Bricusse/Newley classic and multiple Tony Award nominated production: Stop the World – I Want to Get Off! A thought-provoking tale about the fleeting nature of worldly success, this beloved musical celebrates its 50th year in 2011.

“Stop the World! - I want to get off," which debuted on The West End 50 years ago, is set in a circus an tells the timeless tale of a Littlechap, a clown who conquers the world but loses himself. The story will be told through song, dance, drama and the artistry of the Austin Playhouse acting company. The show is a cherished musical classic—a boundless, shameless, and humorously entertaining production

The production—nominated for several Tony Awards over the years—is an action packed, funny and tender story about the choices we make and the opportunities we get during our lifetime. It is about the responsibility we have for our own lives, and how it sometimes feels like your world is spinning out of control and you just want to get off. 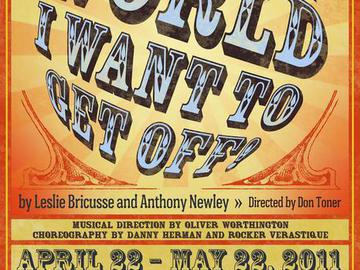 This event has reserved seating. Best available seats at the time of purchase will be assigned by Austin Playhouse. Please call the box office at (512) 476-0084 if you have special seating needs.